It was a great day for all haiku enthusiasts! 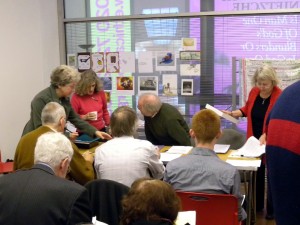 Susan Lee Kerr started us off brilliantly with a talk about developing states of creative awareness which included the thoughts of people ranging from Basho, through Ignatius Loyola to Grayson Perry. Inspired by this we were set a haiku writing exercise and the results were put on a wall display. A great idea to get us writing haiku at the start of the day! Susan’s printed notes will be invaluable to members as a starting point for further reading into the ‘awareness gate’ This was a session which really got people going!

The AGM was a lively session with officers’ reports presented efficiently and lots of positive ideas offered by BHS members for the committee to take up in the near future. We discussed items as varied as: the introduction of ‘Twitter’; developing a members’ area on the website; how Blithe Spirit should respond to the evolution of haiku in Japan; links with the French Haiku Society; our 2012 Spring Gathering; the European Parole Project; our 5 Year Plan; and much more. 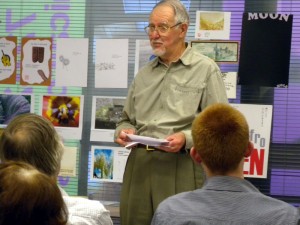 David Cobb led a stimulating session to start the afternoon. After a brief talk on how to perform haiku, we were divided into groups who each had the job of creating a performance based on the haiku David had selected for us. Then the groups performed in front of the whole gathering. And what performance talents were revealed in the society! Such top notch stuff, prepared in only twenty minutes. All the performances deserved a wider audience; this is definitely something to build on for the future.

Colin Blundell then ‘took our minds for a walk’ through music, art and the written word. This was an inspirational experience for everyone. WOW .. what resources Colin provided us with: art by Ayzen, Paul Klee, his own work and that by John Parsons. We finished by creating haiku based on inspirational drawings. These we shared in the session. 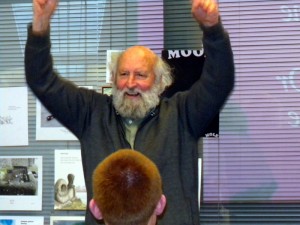 We finished our day by listening to the adjudication of the informal haiga competition by our judges Lynne Rees and Katherine Gallagher. The joint winners were: Phil Madden and Verity Adams. Congratulations to them and thanks to everyone who brought work in for the competition.