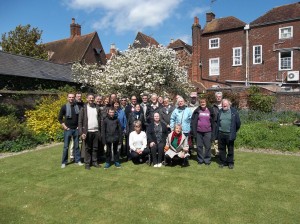 On the evening of Thursday 9th May a gathering took place of twenty-two members of The British Haiku Society, L’Association Francaphone de Haiku, L’Association des Auteurs de Haibun and Kukai Paris at the South Cliff Hotel in Folkestone.

To make our presence known to the general public haiku banners, in both French and English, were hung on the railings along The Leas Promenade opposite the hotel and a book stall and haiku display were set up inside.

After a welcoming dinner in the hotel restaurant we adjourned to the conference room where the organisers shared information about the conference programme. We then dispersed to the hotel bar or local pubs to socialise and to get to know each other better.

On the Friday morning a member of each society gave a short presentation about the history, aims and activities of their own society. It was noticeable that there are three societies in France which cover the activities we carry out in one.

Then the conference split into three goups which each worked together for the rest of the morning and the early afternoon. Two groups collaborated to write bilingual renku, while the third group wrote a bilingual, linked haibun. The three groups had equal numbers of French and English speakers.

Early on Saturday we boarded a coach for Canterbury where the party was met by Brother Kevin who had organised guided tours of the Cathedral for us. After our cathedral visit we had lunch at The Friary, the premises of the Society of St Francis, and followed this with an hour’s free time. The whole day was treated as an extended ginko and conference members found much inspiration for writing haiku. Once back at the hotel private time was taken to prepare our haiku entries for the kukai. This was in two sections: English-language and French-language. All present voted to choose the ‘best’ haiku and runners-up in each of the two sections. The results were as follows:

the cat on the chair

murder in the cathedral

in the washing up

tomb of the Black Prince

a small girl stretches up

On the Sunday morning the collaborative work from the bilingual renku and linked haibun groups was shared and this led to much discussion. The finished works will be published in Blithe Spirit 23.3 – August 2013.

In our final session the activities of the conference were evaluated and the scope for future collaboration was considered. It is anticipated there will be another Anglo-French Haiku Festival in Brittany in 2015.

After a group photograph and a farewell lunch we bid ‘Bon Voyage’ and went our separate ways after what had been a thoroughly enjoyable and productive weekend.