At around 10:15am on a drizzly Saturday morning, the great and the good of the British haiku world converged on Conway Hall, Holborn in London, from near and far to attend the Society’s Winter Gathering/AGM and also to celebrate its twenty-fifth anniversary!

After coffee, chat and a browse around the BHS book stall we took to our seats for the commencement of the meeting. Graham High gave a short introduction on the day’s events.

We were treated to a wonderful presentation and short film from Kala Ramesh. It was surprising to see such a high level of quality and imagination in the writings of such young Indian students. The haiku married with film enhanced the whole experience, which was immensely enjoyable! Thank you Kala!

We then took a short break for lunch and at 1:15pm the AGM commenced.

David Cobb started off by offering a few words of sympathy and support to our French cousins, regarding the previous night’s horrific events in Paris; and those assembled observed a one-minute silence.

Graham High then read out the minutes from the previous AGM and these were signed off as a true account. Graham called for nominations from the floor to chair the meeting, and Andrew Shimield was duly nominated and seconded.

It was announced that Sue Richards intended to step down from her role as Editor of “The Brief”. Sue has done a sterling job with “The Brief” for the past three years and I would like to take this opportunity to thank her for her support and wish her well for the future. I will be assuming the role in the new-year. It was also announced that Claire Knight was also stepping down after her role as Membership Secretary and as committee member without portfolio. Those assembled showed their appreciation for all the hard work carried out by Sue and Claire. Our President, Graham High then gave his report on the year and the prospects for 2016. Each committee member with a portfolio then gave their reports. Graham High read out reports from those who were absent; David Bingham (Events Officer) and David Serjeant (Editor, Blithe Spirit). Frank Williams the Membership secretary announced that the society had a total 295 members, a gain of 18 from the previous year.

We were then given an involving presentation by Claire Knight of the latest BHS publication, the wind that blows through us… (exploring the world of haiku and well-being). This turned out to be an unusual and very relaxing, creative and meditative session involving the senses. Colin Blundell and Paul Hickey gave short talks regarding their involvement in the project. There was also an auto drawing workshop involving those assembled. After which, a vigorous discussion took place.

Graham also launched another recent BHS publication, Silver Tapestry. This book takes the form of celebrating some of the finest essays to have appeared within the pages of Blithe Spirit over the past twenty-five years.

After a break for coffee, Peter Butler treated us to a fascinating presentation on haibun. Excellent examples of haibun from Basho to the present day were read out by various members of the haibun group.

After a break for food and a move to a larger adjoining room, we assembled for the evening’s celebrations. Tables were spaced out throughout the larger room. After a toast was proposed for twenty-five years of the BHS, we were all assembled into groups for a fun, and highly creative session of renga. Thanks to Susan Lee Kerr for running this session and keeping order! 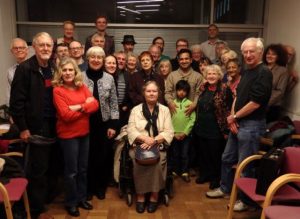 It was a thoroughly enjoyable day and I for one am already looking forward to the “Winter Gathering” 2016!
Well done all!