David Bingham started the day introducing a session about organising work into sequences. Participants were given some examples of haiku and asked to think about the interesting question of what might follow, some example sequences were also provided. Then after an introduction to Haiku sets (Gunsaku) and Sequences (Rensaku) there was a small group sequence exercise. The resulting sequences were then read out and displayed. Unfortunately none were signed so the following example has to be anonymous. 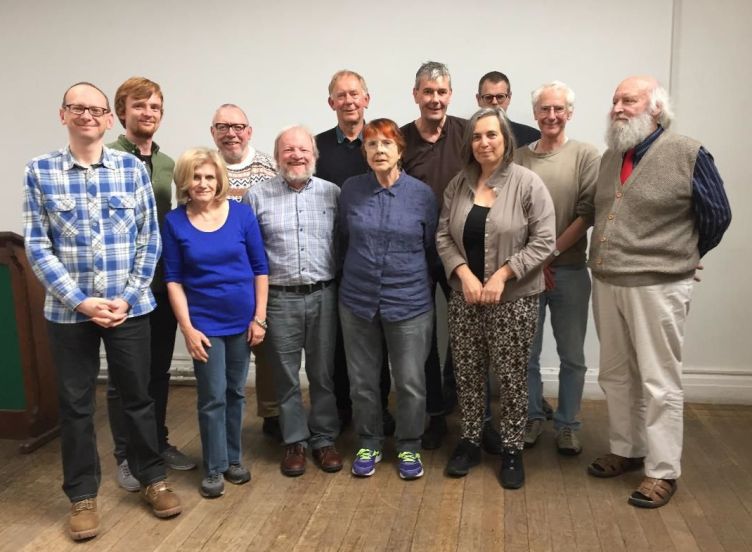 cherry petals
scattered at my feet
on my way

Everyone agreed that this was an interesting and productive session.

Colin Blundell led a very interesting session during which he asked us, looking at a range of haikuic examples, to consider how various haiku writers had made connections between images.

He argued that we are constantly asking what he called ‘virtual questions’ – we don’t actually ask them out loud – they are virtual, occur briefly in the neurons just before we act out a response; they have the effect of sustaining life: what shall I do next? What will my next idea be? Shall I scratch my arm now? What can I see/hear/feel/smell/taste? Shall I move my bottom in the chair now? Shall I look away from the computer screen? On and on… And of course haiku writers, being human, are no exception to this process. They are constantly asking virtual questions like ‘How can I connect this with that?’ ‘What image might connect feeling fully with the first thing I noticed?’

The most resourceful virtual question anybody can ask is HOW CAN I CONNECT THIS WITH THAT?
Example: Shiki, ‘to write a haiku look at the violet at your feet and then look up at the distant mountain…’ Connect them.

By looking at a range of examples, we had to step into the shoes of each writer and figure out how they might have made connections. We did the same thing with connections between verses in some renga.

Then Kate B Hall led a topical Haiku and Shakespeare workshop, participants were asked to write individually and in groups haiku inspired by passages from various of Shakespeare’s plays. A found haiku exercise followed and then a final exercise using Prospero’s “Our revels now are ended.” From the Tempest, where both inspiration and found haiku could be used. Then end results were then read to everyone. Although Shakespeare was chosen as the inspiration for this session, any writing, poetry, fiction, non-fiction etc. can be used in this way.

Here are one group’s haiku from that last exercise:

The whole day was interesting and creative, many thanks to participants and session leaders.