This year the Spring Gathering of the BHS took place in the St. Denys Hall which is close to the River Thames in Chiswick. There were three parts to the day: 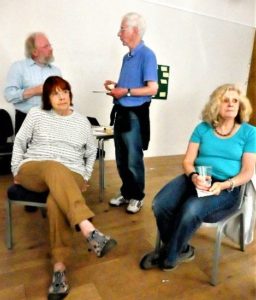 In the morning session we had a series of lively discussions about some commonly used statements regarding haiku.  This exercise, as one might expect, led to the expression of the differing points of view which exist within the society regarding the nature of haiku.

The group then took part in a simulated editing exercise in which two or three haiku had to be selected for publication from the ten which had been submitted. Interestingly, given the divergence of opinion in the first exercise, there was a more general agreement on the haiku which should be published.

We were fortunate in having a sunny afternoon for the ginko (a haiku-writing wander around the riverside area of old Chiswick Parish Church). When we returned we shared and discussed the haiku that had been produced.

Here are some of the haiku which were written on the ginko:

river trash
trapped between the owner
and the dog
— Rose Ades

a crucifix stands apart
mobile phones rise and fall
“I do”, she replies
— Mark Floyer

The day finished with a fast-paced, swap-around burst of shared haiku creativity.

Format for all, devised by Frank Williams, is Format: v1 spring, v2 love, v3 summer, v4 autumn or moon, v5 winter, v6 spring. The idea for Speed Renga was devised by David Bingham and Dick Pettit. The conductor was Susan Lee Kerr. The premise is sociable group poetry writing, with the added ‘speed’ element of changing places so that the working groups change and poets get to work together and get to know each other in this fun, fast creativity.

Here is the renga voted favourite by those who participated:

blown from my hand
the love poem you sent me

at the beach
dad staggers back
with five ice creams

wrestling with nightmares
the full moon awakens me

fairy lights
each one a different colour
on the bare branches 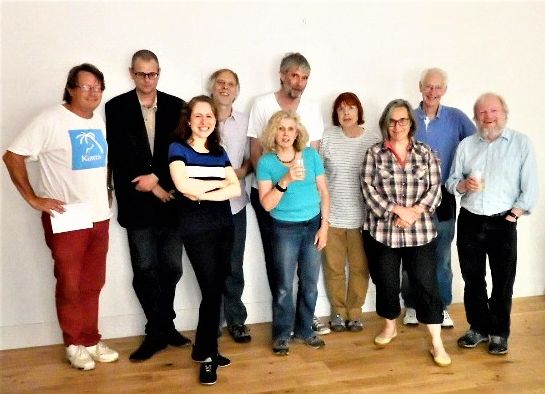 Overall, it was a splendid day and much enjoyed by all those who attended.  Afterwards we adjourned to a local hostelry for a relaxing drink.