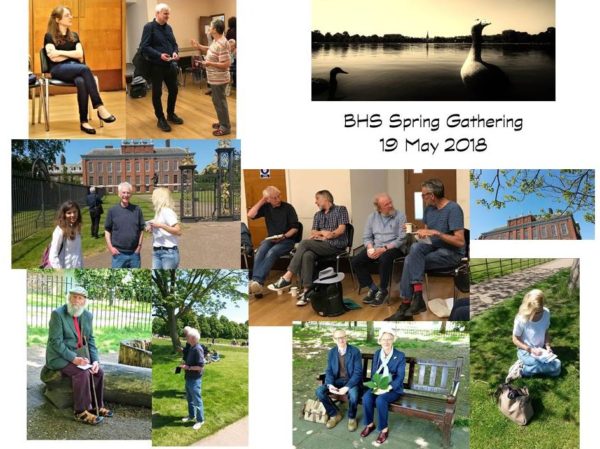 This year the BHS Spring Gathering took place in the Meeting Room at the Kensington Central Library. There were four main parts to the day:

In the morning session led by Debbi Antebi, participants wrote haiku on the theme of ‘spring gathering’. There were many different perspectives and approaches to the same theme, as will be seen from the examples below.

spring gathering
its wits and me –
royal wedding
— Alan Summers

spring gathering
i scribble something
& cross it out
— Caroline Skanne

spring gathering my strength for a haiku
— David Jacobs

spring gathering
the scent of wisteria
at my doorstep
— Debbi Antebi

spring gathering
hares on the hill
some boxing
— Kate B Hall

a gathering of eggs
the cuckoo
cracks first
— Mark Gilbert

This session was led by Mark Gilbert, who informed us about a relatively new form of haiku/senryu in which one line (or part of a one-line poem) consists of the name of a person who is alive, dead, real or fictional. Some examples of the form were shared, and participants were asked to try their hand at writing whoku.

Rachmaninov
the impossible shine
of his shoes

We were fortunate to have a sunny afternoon for the ginko in Hyde Park, which was led by Alan Summers. Upon our return, we shared the haiku that had been produced and held a haiku contest (kukai). The winner of the contest was Frank Williams, who received a haiku book prize.

Here is his winning haiku:

perfect day
the sat on log has
its own rhythm

The day finished with a haibun activity led by David Bingham, who discussed different ways in which haibun may be written and shared strategies for crafting strong pieces. Participants were then asked to write their own haibun based on their ginko experience and to share their writing within their groups.

Overall, it was a great day filled with haikai activities, and the feedback received from the participants was very positive.