I was very kindly invited by The British Haiku Society to attend the opening evening event at Wagamama, a Japanese influenced restaurant in Liverpool. As soon as I entered Wagamama I knew I had entered an oasis of calm and tranquility with a distinct Zen like quality of flow.  I felt immediately that haiku had a home here.

The restaurant was soon filled with people eager to taste the Japanese inspired food and at the same time experience for themselves the concept of haiku and how integrated it is into Japanese culture. The guests were given a selection of Haiku Cubes which act as a medium of inspiration in creating their own unique poem. Alongside this was cherry blossom paper with 2 examples of haiku written by one of Japan’s most prolific Haiku Master’s Matsuo Basho. Together with 2 haiku written in the 21st century. It made for some great inspiration and anticipation at the chance to create live haiku on the night.

This was followed by my talk about haiku – it’s origins, form and influence in society back in the 17th century and in the 21st century. And also a little bit about Basho and how integral he was to both the expansion and awareness of haiku in the Japanese culture. The guests were then presented with the most delicious food which I can only describe as nothing less than works of Art! And the Head Chef visited each table and gave a talk on the food, it’s flavours alongside its Japanese influence.

In-between Mains and Deserts every one got busy writing Haiku! And I have to say the Haiku produced was of such a high standard, some of which were a strict 17 syllabic count which was very impressive.
There was a chosen winner and a prize of a haiku collection book was given.

It was wonderful to see how a form of poetry from many centuries ago had traveled from Japan to Liverpool into the 21st Century and maintained its ability to reconnect “Self with self” and connect people to each other. It restored my faith in the power and ability of words to heal the world haiku by haiku. 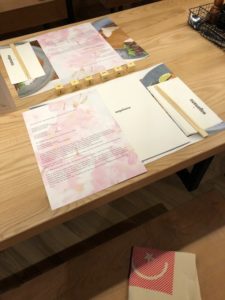 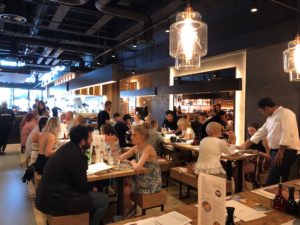