Haiku contest for the opening of Wagamama Chelmsford 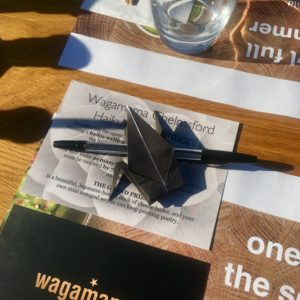 This summer, the British Haiku Society was approached by Wagamama to assist them with a series of restaurant openings across England. As a new and eager member, I volunteered to help with the Chelmsford branch and, some weeks later during the height of the heat wave, found myself on the train to a city I had never been to, to teach total strangers about the marvelous and mysterious form that is haiku.
The Wagamama marketing team were very helpful in the fortnight leading up to the event and gave me a generous budget from which to provide haiku entertainments and draw a fee. We decided that as it was to be an outdoors event, with diners turning up at different times, it would be best if I could run a haiku contest, whilst walking around to chat informally about haiku with the visitors individually as they waited for their dishes to arrive.
With this in mind, I turned up early and brought decorations of origami cranes in the Wagamama colours of black, white and orange to set at each place on the table alongside a haiku competition entry form and a biro. I had a table to one side (next to a very charming sake stand) and covered it with more entry forms, some beginners’ haiku guides I had written and printed, and of course the grand prize: a copy of Haiku: Classic Japanese Short Poems published by Amber Books, a mini notebook and pen, and a Wagamama tote bag.
As I wandered around and talked to people about haiku, I was amazed by the enthusiasm with which they greeted me. Everyone was friendly and incredibly eager to learn about and write haiku, particularly the children, who encouragingly had all been learning about them at school. It made my job very easy: the hard part was judging so many fabulous entries. In the end the prize went to a lovely family, who had between three of them submitted over twelve excellent haiku!
I feel very lucky to have had the opportunity to help with this event and am immensely grateful to both the British Haiku Society and Wagamama for making it happen and welcoming me on board. 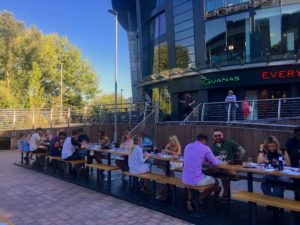