On 8 August 2018 the BHS had its third haiku event in partnership with Wagamama. The event was held in the newly opened restaurant in Covent Garden, London and we would like to thank Jas Ayling (regional marketing manager) and Franz Gaspari (restaurant manager) for their help in organising the workshop.

The event had the unusual format of combining dinner+cocktails+haiku workshop. During the haiku workshop the 30 participants were introduced by Iliyana Stoyanova to some Haiku Basics (history of the genre, composition, differences between haiku written in Japanese and Western languages, etc.), The Way of Haiku with its main principles, and some important Haiku Techniques (comparison, contrast, association, sense-switching, narrowing focus, sketch, wabi-sabi and yūgen).

After this short presentation the participants had the opportunity to do some exercises – for instance find the kigo or rewrite a certain haiku, or try to write their own haiku by following the basic haiku rules. They were also acquainted with the most recent copies of Blithe Spirit, the latest BHS members’ anthology Ekphrasis and the bilingual anthology Beyond Words published in collaboration with the Bulgarian Haiku Union and Haiku Club-Plovdiv.

Here are some haiku written during the workshop: 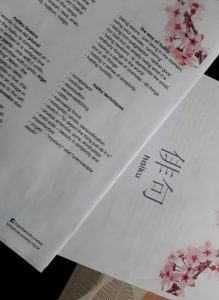 clear sunrise
curve of the horizon –
peace at last