David Bingham and I spent two wonderful days in Sofia with our good friend and guide Iliyana Stoyanova. After a two hour and forty-five-minute flight from Gatwick, we arrived in snowy Sofia at midday on 17 December 2018. Iliyana was there to welcome us. After settling in our hotel, we had lunch, and started a tour of this beautiful city. Over the next two days we visited The St. Alexander Nevsky Cathedral (one of the largest Eastern Orthodox Cathedrals in the world) and the The Museum of Christian Art, housed in its crypt; the National Ethnographic Museum; Sofia City Art Gallery and many other places of interest.

On the evening of 18 December, we attended the launch of the Bulgarian/English collaborative haiku anthology, ‘Beyond Words/Отвъд думите’. We were warmly welcomed at the American Center at the Sofia City Library by our Bulgarian haiku hosts and were kindly given, much to my surprise, many gifts. About forty-five people attended this event. The evening started at 6pm and was split in two halves. The first half of the proceedings consisted of our hosts voicing a welcome to those present. Then there was a 4-part recital from the anthology; and two singers Alexandra Ivoylova and Dilyana Georgieva entertained us with their fine voices.

The second half consisted of David thanking our hosts in Bulgarian and subsequently giving a commentary on some of his favourite Bulgarian haiku. I then read out my haiku, and those of Diana Webb, and to finish a haiku by Iliyana. Throughout this part, Iliyana was very busy translating. She also shared with the audience Keith Coleman’s wonderful letter with comments on almost every Bulgarian poet included in ‘Beyond Words’ and David Jacobs’ review of the anthology in the latest issue of Blithe Spirit. The haiku that I read of Iliyana was:

which to me summed up the effort she had put into this project over a long period. Overall, a wonderful evening, which I will never forget. A big thank you to our hosts, the Bulgarian Haiku Union, the Haiku Club – Plovdiv and the other poets, their representatives Sofia Philipova, Zornitza Harizanova, Ivanka Yankova and Vessislava Savova for their splendid welcome and kind words. I truly believe that haiku can bring people together in the most amazing and positive way.

Some photos from our visit to Sofia and this special evening are attached below: 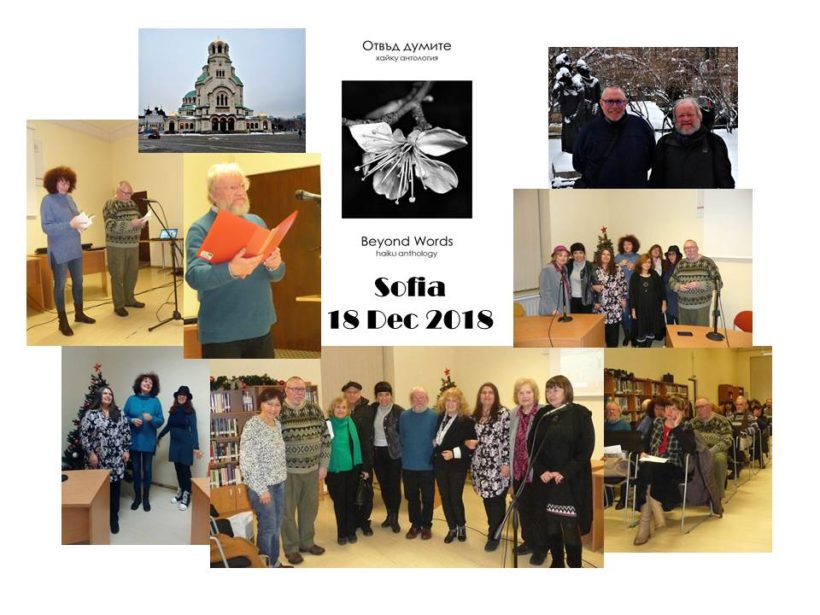