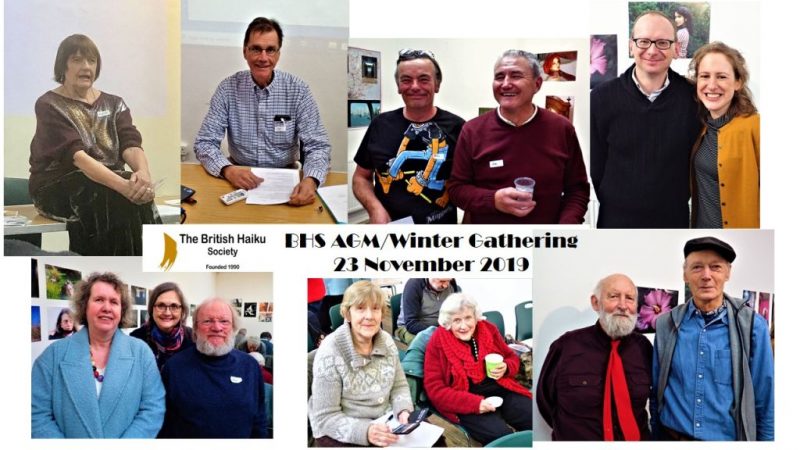 The day started off with refreshments, where members reacquainted themselves with old friends and met new ones. In total, 39 members were in attendance on the day.

Long-standing BHS member Diana Webb led a haibun workshop entitled ‘Dialogues’, where we were asked to partner up to produce a haibun based on a dialogue between the prose and haiku writer. Art postcards were passed around by way of prompts. Several of the haibun were read out. Some very interesting pieces were produced.

After the AGM, which went routinely well, we had lunch, then we were treated to a workshop led by Lee Gurga, past president of the ‘Haiku Society of America’, former editor of the journal, ‘Modern Haiku’ and currently editor of ‘Modern Haiku Press. Lee started off with an interesting talk regarding ‘what’s next after you’ve had work published’. Lee explored the issues of personal mastery, group service, and genre vision as a way to challenge you up to your next game level. The second part of his presentation consisted of the workshopping of haiku that were emailed to him earlier by members. This produced a very lively discussion regarding haiku form, which words to take out etc.

It’s events like this that make me believe, if only a few our politicians read haiku, then the world would be a happier, kinder place. It’s then, I think of the quote, and I paraphrase, “When all seems lost, remember there is always hope (and haiku).” I’m pleased to report that haiku is alive and well in the UK.